I’ll admit it — I said I wasn’t going to race again until 2017. But, fun runs and race day training runs don’t really count do they? 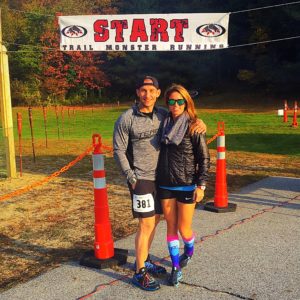 |October 16, 2016| Jesse and I set out for a race day training run in Pownal, Maine. This means, the race was really just another workout [long run] to check off the list. Hosted by Trail Monster Running, the Big Brad 50k, promised big hills, “gnarly terrain” and plenty of single track. As described, it was our type of run. Because a well-marked 30 miles is ALWAYS better than figuring out your own 30 mile trek, I opted to sign us up.

When race day is really a training run, there is a refreshing sense of calm and ease to preparations. It also helps that we were only traveling an hour from home. So on Saturday night, we packed our packs for loop one [My pack: Stinger Honey Waffles, Isagenix Chocolate Decadence Meal Bar (1 half), Isagenix Fuel (an apple sauce like blend), salt tabs (just incase), chapstick (essential)], filled our bottles [1 bottle of each: Isagenix Replenish & Recover], picked out race day attire [down to the bracelets] , filled a drop bag [Trail Toes, fuel bags for lap two, extra Replenish, Tiger Balm, and extra clothes], and packed a post race bag [clean clothes, towels, body wipes, re-useable bags for all the dirty stuff].

On Sunday morning, we woke up at 4:30 AM to give plenty of time for hot showers, coffee drinking, car packing and dog walking. We left the house around 6:45 AM, in too many layers [yes, it was 30 degrees! BRR!], bagel and peanut butter in hand [go to race day/long run breakfast] and headed North to Pownal, Maine.

We arrived to the Start Line at 8:00 AM. The START and FINISH would be at the Pownal School field [love the convenience!]. The best part about pre-race logistics – they all took place inside the school gymnasium. This meant heat, REAL bathrooms, extra room to stretch and roll, a place to gather belongings and hang out before the start. In the trail running world – this is considered luxury. 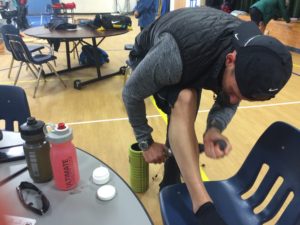 Around 8:50 AM, following a quick debriefing, we [the runners] made our way outside to the Start Line corral. Now remember, this was just a training run, so there was no real sense of race day nerves, anticipation or hype. It was just going to be a long, well-marked run, with a little extra company.

The sun was shining, the air was crisp [but, not unbearable – the kind of chill that still warrants shorts and high socks, a jacket and gloves that will likely be lost a few minutes into the run] and the race began. It was set up to be a pretty perfect day.

So following announcement of the start [I am not even sure what this was…], we were off and into the woods, for a 1 mile climb to the top of Bradbury Mountain – the view at the top was incredible [I wish we snapped a photo]. If you know me, you know I like the uphill climbs, I’d take them over a flat run and definitely over the downhill any day. So, the slow and steady hike up was far from heartbreaking.

Upon reaching the top of Bradbury Mountain, we hit the single-track trails. First, let me explain to you, Bradbury Mountain is actually better described as a really big hill, don’t let the term, “mountain” fool you. It’s a baby mountain in the terms of mountains, but as runners, we take what we can get. It’s still climbing, it still has a view, and it’s close by. And, since we reached the top of our climb pretty quickly, we ran the single-track, at a relatively easy, single file pace.

Remember, this was a training run. This was not a race [for us]. I’m telling you this because this is something I had to tell myself. It’s hard to run a race at a training pace, it’s hard to let others pass you or keep an easier pace. It’s so much easier to go all out, dig deep and run hard. When it’s a race day workout, you have to put pride aside and run your race

So, I ran, for another .7 miles [give or take, that’s what GPS will tell you]. It was light footsteps and hops, maneuvering around rocks, roots and tree stumps. It was the fancy footwork type of running that we can only credit to those beautiful leaves. I probably forgot to mention, they are only beautiful when on the trees. Once they fall to the ground [as they have in Maine], well that’s another story.

The Beautiful Fall [literally and figuratively]

You are probably wondering why I broke down my run into a .7mile piece? This is why. At the 1.7 mile mark, I [not] so gracefully crashed on the trail. Rock, root, Mother Nature devised booby trap – call it what you will, I found it under all of those [beautiful] leaves. So sunglasses flying, feet out from under me, I found my way to the ground pretty quickly. I moved off to the side – the other runners had enough obstacles on the trail; they certainly didn’t need to contend with a human too.

So here I am, not on my running feet, on the side of the trial [best known as: trail mess]. The girl running behind me confirmed that I was okay and continued down the trail to let Jesse know about my fall. I brushed off my knees, picked up my glasses, got off of the ground –slowly-, and hobbled a few steps to test out my left ankle. As runner after runner after runner passed by, all asking if I was okay [this is why I love the trail running community], I walked my way down the trail. Yes, I walked [baby steps first]. When I met up with Jesse, I told him I would see what happened as I attempted to run it off.

We ran down to Aid Station 1, where I kindly requested Advil [there is a first for everything] and continued on through. It’s likely that you would not know that I crashed early on in this race, because I just kept running. I knew if I kept moving, my ankle might work with me for the rest of the first loop. We ran winding trails, up and down, left and right, over bridges, on the road [we still managed sub 8 minute paces here], followed the power lines for a short while and wrapped back around the course to complete loop one.

I was running. But, I was not running well, for me. By no means was this really a sub par performance; in fact, a few even commented that I was running stronger with a hurt ankle. [Remember what I said about running your own race? Here’s another example of what not to do: DO NOT COMPARE YOURSELVES TO OTHERS].

But, as I could feel my ankle touching my shoe, I knew it wasn’t going to be one of those ankle-rolling experiences where you just run it off. 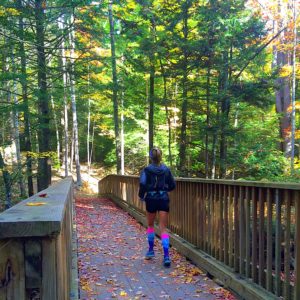 And, I was perfectly okay with that. I ran the post crash 13 miles without a single negative thought. I was happy, I chatted with Jesse, I slowed down in places I normally wouldn’t slow down, I kept moving forward, I ran with friends, made some new friends and soaked up the perfect running weather. And, wished that I could keep running. But, zero negative thoughts – ZERO!

So, when I came down the final hill from loop one. there were no hard feelings. Downhill was a clear reminder that my ankle was not happy, AT ALL. And, that was okay. It’s life. It happens. It is not the end of the world. Jesse grabbed some food from the Aid Station. I pulled together his food pack and some Replenish, gave him a kiss and sent him on his way.

I checked in with the race volunteers to make sure they knew I was a DNF [this is protocol – no one needs to be worried that you are missing], loosed the laces to my shoes [ultimate affirmation that I was done] and set off for that nice gymnasium bathroom to clean up my sweaty trail mess and enjoy the next couple of hours.

It was a beautiful afternoon. I soaked it up fully. Fat ankle, ice pack, and all. I chatted with friends and new friends – heard stories of recent trail adventures [Bigfoot 120, road races, and the days race in review]. I watched finishes that I never would have seen if I was still on course [I think the top five men all broke course record]. I waited for Jesse [and, was super proud, because this was his longest run in a long time]. I drank water, snacked on pretzels and had a hot cup of coffee. I congratulated friends that made it in from the course, I took Square World worthy [k]ankle shots, and I captured Jesse’s finish with a photo and a kiss. 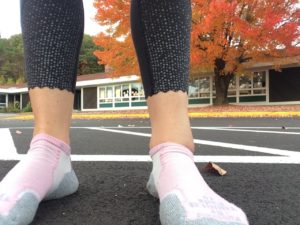 Jesse came through that finish with the post really long run daze. He changed out of sweaty clothes and into a new Trail Monster Running hoodie, pulled himself together and we hung out for another hour or so, talked with friends, enjoyed a chocolate chip cookie [ALWAYS a staple], and then packed up to head home. 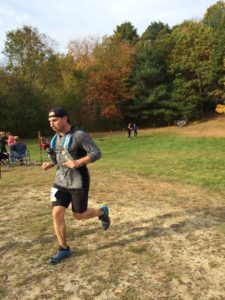 We arrived home around 6:00 PM, greeted by wiggling butts and an obsessively meowing cat. This is where the real fun begins. The race day aftermath…

You walk a little funny. You get home and can’t wait for a hot shower. And, in our house we team up to tackle the unpacking and chores. After you run for 30 miles [and, sometimes more], there is one sure thing – you smell disgusting and your clothes smell even worse. YUCK! Into the wash they must go. Luckily, I am really good at raceday routine and always bring a reusable bag for all dirty laundry so the process is simple when we get home. Out of the bag, and into the washer, plug your noise the entire time. Because, the smell. If I could explain the smell, well then you would start to understand why this is top priority. Clothes in the washer, a lid full of Persil 2-in-1 [it has an amazing smell! I absolutely know why it was #1 rated for smelly workout clothes by a leading consumer testing publication], door closed and it is on to the hot shower. Because after the [race]day, this shower is earned, and has never felt better. 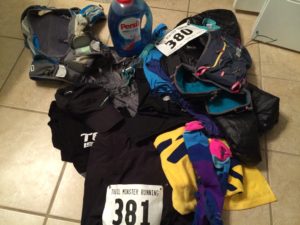 Want to try this detergent too? Click here for a coupon.

The day ended on the couch, elevation and ice, quality time with Jesse, an episode of The Voice and another chocolate chip cookie.

I will be off of my feet for a few days [or weeks] but I will fill my time with the other stuff [the workouts I can do, the extra blog writing, the real life kind of things] and I’ll be back in action in no time. Until then, I’ll live through your running stories.. 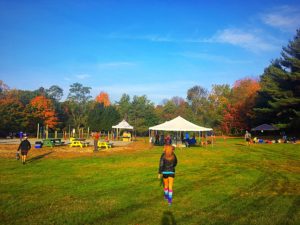 **Persil Proclean provided compensation in exchange for this sponsored blog post. However, all opinions expressed here are my own. 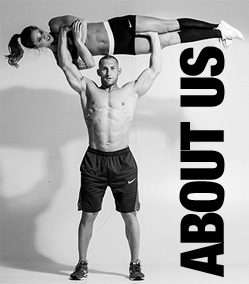